Advance Praise for JFK and Mary Meyer: A Love Story 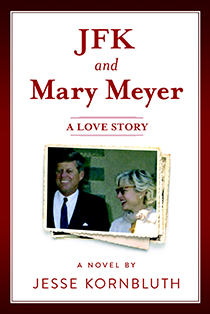 “A delicious, gripping recreation of a compelling mystery told in a voice full of secrets and charm. Jesse Kornbluth has written a page-turner brought alive by expert social detail and poignant insights.”
– Tina Brown, CEO of Tina Brown Live Media and author of the #1 New York Times-bestseller, “The Diana Chronicles”

“A ‘secret history’ as poised, witty, and elegantly seductive as its heroine. Jesse Kornbluth’s means are deceptively simple—a deftly imagined diary and its Pale Fire-like footnotes—but his accomplishment is all the more devastating for that. ‘JFK and Mary Meyer: A Love Story’ delivers all the immense glamour, corruption, and intrigue of the Kennedy moment in a toothsome chocolate box of a book.  You’ll want to gobble it up in a single sitting.”
– Steven Schiff, writer/producer of the TV series, “The Americans”

“Serious students of the Kennedy assassination know that the mysteries did not stop with the President’s death. The fate of Mary Pinchot Meyer remains an open question.  Jesse Kornbluth’s book feels like spending an afternoon hearing the very best gossip from a firsthand source.  Razor-sharp, whip-smart, ingenious, and deeply moving.”
– Joseph Finder, New York Times bestselling author of “House on Fire”

“A rumored affair, a burned diary, and a string of what-ifs are the potent ingredients Jesse Kornbluth blends to create this heady cocktail of a novel. Under the fizz and froth lies a deeper tale about self-awareness and self-delusion, power and patronage, and—oh yes—murder and intrigue.”
– Christina Baker Kline, #1 New York Times bestselling author of “Orphan Train” and “A Piece of the World”

“Ah, the pleasures of following mature protagonists who know the double stance of lingering in imaginative musings and being firmly grounded in reality. Jesse Kornbluth’s razor edge prose and dialogue capture love’s triumph and ensuing agony. I could not put it down.”

“You look to guys like Jesse Kornbluth for books like this one, and thank God we’ve got him. Obsessively researched, cuttingly wise, Kornbluth turns Mary Meyer from a footnote in the story of JFK into a star.”
– Lucian Truscott IV, author of the New York Times-bestseller, “Dress Gray”

“Jesse Kornbluth’s fact-based novel is a quiet tour de force, a cross between F. Scott Fitzgerald and Noel Coward, with more than a touch of John Le Carre.”
–Deborah Davis, author of “Katharine the Great: Katharine Graham and Her Washington Post Empire”

“Masterfully crafted, JFK and Mary Meyer is at once a blazing love story and a deft work of scholarship and scathing insight. In this provocative reimagining, grounded in fact, Jesse Kornbluth explores that incandescent line where historical truth and fiction intersect.”

– Dawn Tripp, author of “Georgia: A Novel of Georgia O’Keefe”

“Veteran journalist Jesse Kornbluth has written a short, elegant tale built around dialogues that are at once human and plausible. Kornbluth’s book is light on conspiracy and rings true on emotions.”