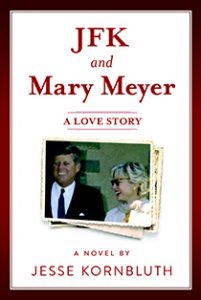 From January 1962 until his death, John F. Kennedy had one constant lover: Mary Pinchot Meyer, a family friend and a frequent guest at White House dinners. Like his wife, she was expensively educated and socially prominent — but she was more adventurous, opinionated, and sensual.

On October 12, 1964, eleven months after Kennedy’s assassination and two days before her forty-fourth birthday, Mary took her noon walk along the towpath of the Chesapeake and Ohio canal in the Georgetown neighborhood of Washington. A gunman shot her, execution style, in the head and the heart. An African American man was arrested, tried, and acquitted. Her murder remains unsolved.

That night, Mary’s best friend, then living in Japan, urgently called Mary’s sister Tony and Tony’s husband, Ben Bradlee. “Mary had a diary,” she said. “Please get it and secure it.” Eventually, the Bradlees found a small notebook, mostly filled with paint swatches, sketches, and shorthand ideas for her art—and no more than ten pages about an affair with an unnamed lover. The Bradlees burned the notebook.

My novel — based on extensive research and personal knowledge of Mary’s world — is the diary I imagine she might have written.

To read reviews, blurbs and an excerpt, and to buy the book from Amazon, click here. 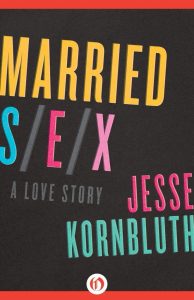 Married Sex
Blair is a college dean. David is a divorce lawyer. They live on Central Park West in an apartment they couldn’t afford now. Best of all, they’re still hot for one another. A dream marriage? Pretty much. They’ve even invented a simple way to beat the curse of adultery, the #1 marriage killer: If you’re tempted to cheat, bring that person home. It never happens. But a few weeks after their daughter goes off to college…
To buy the paperback from Amazon, click here.
To buy the Kindle edition from Amazon, click here.

HeadButler.com: The 100 Essentials: Books, music and movies for people with more taste than time.
Most of the books that are published aren’t edited well and may not be worth editing. Most of the music that’s hyped will bore you in a month. But almost everything ever published, recorded or filmed is available on the Internet, and a lot of that old or overlooked or just plain unknown stuff is really good. That, anyway, is what I thought when I launched HeadButler.com in 2004. A decade later, I collected my 100 favorites.
To buy the paperback from Amazon, click here.
To buy the Kindle edition from Amazon, click here.

A Christmas Carol
The Charles Dickens classic may be the second greatest Christmas story ever told, but have you tried to read it to a child? I did — and my eight-year-old daughter begged me to stop after 5 minutes. Why? Because Dickens wrote “A Christmas Carol” in 1843, when language and pacing were much different. So I found the obvious solution: I cut the 28,000-word original in half. I didn’t butcher Dickens, I didn’t rewrite him. I just edited the story so what the reader gets is …the story. A gifted artist, Paige Peterson, contributed illustrations that give you the feel of that chill of that London winter. And now, I think, it’s a pleasure — and a thrill — for children and adults to read.
To buy the paperback from Amazon, click here.
To buy the Kindle edition from Amazon, click here.

Highly Confident: The Crime and Punishment of Michael Milken
In 1987, Michael Milken earned $550 million. In 1988, when the government wanted to put him in jail and that paycheck was publicized, many people assumed he had to be a crook. Later, he was convicted and jailed. Was justice done? I spent 400 hours interviewing Milken and his colleagues. I had l0,000 pages of leaked documents. What I wrote was a minute by minute prosecution of the greatest manhunt in Wall Street history. Guilt? Innocence? You make the call.
To buy the paperback from Amazon, click here.

Airborne: The Triumph and Struggle of Michael Jordan
In 1993, Michael Jordan wasn’t giving many interviews, but he saw me because I came from Vanity Fair and that was his wife’s favorite magazine. And because he was seeing me, others did. I wrote 5,000 news-breaking words, but Vanity Fair didn’t run the piece, and I resigned. What to do with my research? Write a book that might appeal to kids ages 8 to 16.
To buy the paperback from Amazon, click here.

Pre-Pop Warhol
After I wrote the New York Magazine cover story about the death of Andy Warhol, I wasn’t surprised to be asked to do a book. Happily, it was a picture-and-text, coffee table book that showcased the commercial art Andy made before he got famous. The cover is like no other: corrugated cardboard. The pages are just as beautifully designed.
To buy the paperback from Amazon, click here.

Now You Know: Reactions After Seeing Saving Private Ryan
When I was Editorial Director of America Online, I saw books early. Among them was a photography book about Steven Spielberg’s “Saving Private Ryan.” I looked at the pictures and cried. I knew others would too, so I built a special feature about the film before it opened — and asked for AOL members to share their reactions to the movie and their war memories. 30,000 people posted that first weekend, and AOL became the home of the national conversation about the movie. (Sample post: “My grandfather, who is a 72-year-old naval veteran of WWII, never really talked about his experience during the war…. Last weekend, we saw ‘Saving Private Ryan’ together, the whole family. His face wore a look of indifference and doubt. But in the end, he cried. I have never seen my grandfather cry; but on that day he did. We left the movie theater and walked in the rain to our cars and the tears still fell. He had only one comment: ‘Now you know how it really was for me…’”) I alerted Spielberg’s people, who agreed that we should take the best messages, create a book and give the royalties to charity. This is that book.
To buy the paperback from Amazon, click here.

Because We Are Americans: What We Discovered on September 11, 2001
It’s no surprise that more people shared their feelings and memories on AOL message boards. When I look back on the five years I spent at AOL, I can think of many examples of special programming that really were special. But what we did on 9/11 and the response of our members — that stands alone. Because in that dark September, we fulfilled the mission of an online service. We served.
To buy the paperback from Amazon, click here.
To buy the Kindle edition from Amazon, click here.

Notes From the New Underground
1967. I had enough credits to graduate from college. But if I did, I’d be drafted. Thanks, but no. So I added a fourth year, got a book contract, and edited an anthology of pieces from the “underground” press. At 22, I published my first book.
To buy the paperback from Amazon, click here.

Leave Something on the Table, and Other Surprising Lessons for Success in Business and in Life

Frank Bennack is a business legend — he was CEO of Hearst for a mind-boggling 29 years; under his leadership Hearst revenues grew 14 times and earnings increased more than 30 times. How did he do it? He turned a magazine-and-newspaper company into a start-up. He bought TV stations. He sought out partners. And then lightning struck. One of those partners called Frank and asked if Hearst might like to buy 20 per cent of ESPN, a cable network then featuring tractor pulls. Hearst bought that 20 per cent for $167 million. ESPN is now valued at more than $40 billion. It’s not too strong to say that was the deal of the century.

The owners of ESPN could have called anyone. They called Frank. Why? That is the question “Leave Something on the Table” answers. Because the underlying story of this book isn’t how a poor boy from San Antonio scaled the heights and stayed at the top for three decades, it’s that he’s the model of what a leader should be, and not just in business.

To read more and to buy the book from Amazon, click here.

The Other Guy Blinked: How Pepsi Won the Cola Wars
Why did Coca Cola come out with New Coke, the biggest marketing disaster of the decade? Because Pepsi-Cola had commercials starring Michael Jackson. 90% of the American people saw those commercials many times. Pepsi sales boomed. Coke had to do something. That is the thesis of this remarkable inside account of the cola wars, as told by Roger Enrico, the marketing genius who was the CEO of Pepsi..
To buy the paperback from Amazon, click here.

The Collaborative Habit: Life Lessons for Working Together
Twyla Tharp, the genius choreographer, is a perfectionist. “If you’re not early, you’re late,” she told me when we started to work on this book. I made sure to be early. And listen carefully. And learn so much. As will Twyla’s readers.
To buy the paperback from Amazon, click here.
To buy the Kindle edition from Amazon, click here.